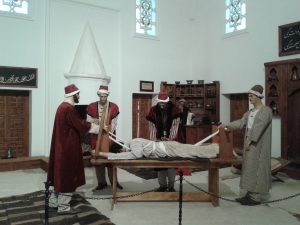 In the drug production, the Ottomans used methods that Islamic medicine had acquired from ancient civilizations. Minerals were pulverized and cleaned by soaking in water. Juices of medical herbs and some fruits were pressed and oils extracted. Some substances were boiled down to a certain level, others were collected from the froth. Other frequently used methods were cooking in cinders or roasting drugs in a beaker buried in the fire.

Carbonizing in fire, calcification and reducing to ash were processes more often applied to inorganic and animal drugs. Some drugs were being refined by distillation, using a variety of alembics.

The composition of many drugs contained oils from fragrant flowers such as rose, violet, hyacinth, lily, or

wildflower together with the oil collected from the trunk of the balm tree. Pastes usually contained various drugs with rose and honey. They were remembered under the names of those who discovered the use of one of their ingredients or of a paste as a whole. In the Topkapı Palace’s Helvahane, pastes, confections, and some other medicines were prepared.

Powdered drugs would be kneaded into a dough using rose water and cast into specifi cally made molds. The tablets would then be taken out of the molds and dried to be stored. When needed, patients would either be made to swallow them or to dissolve them in water and drink the solution. On many cast tablets, healing incantations such as “yâ âlimen bi hâli aleyke ittikali” (I place my trust in You Who knows my state of health) would be written. Today, many tablets carry the emblem of the producing company impressed on them (2015).

Amber tablets were used as cordials, appetizers, digestives, and especially as aphrodisiacs. On those amber

tablets, we find inscriptions such as “mashallah, sıhhatbâd” (God willing, health may come) or “âfi yet-bâd, yâ hâfız” (to good health to the one who memorized the Qur’an), or animal motifs such as ants, scorpions,

Syrups were usually called sharab or sherbet. Quince syrup was recommended against liver pain and nausea.Violet syrup, used in pleurisy, pneumonia, and kidney or bladder diseases, was made by boiling fresh or dried violets for one day and one night, kneading and pressing the reduced mass with filtered water and sugar, which was then stored in glass jars. For one concoction prepared in the Topkapı Palace, jujube, poppy, pearl barley, and water lily flowers were used.

When the Dar al-shifa’ opened, there was a separate place for producing drugs, initially called syrup kitchen

(Şuruphane), later paste workshop (Meâcin Kârhanesi). This place opened twice per week to distribute drugs to poor patients. The syrup kitchen, which represented the first hospital pharmacy in 1490, received the following equipment: To distill rose water and other essences, three stoves (alembics) made of lead, utensils to cook syrup, surgical instruments, ophthalmological instruments and ingredients for eye drugs, furthermore vessels to store drugs, pastes, syrups, and oils and syrup cooking staf. The drugs were prepared by a “drug grinder and syrup maker” (edviye-kûb and şerbetî).

When it comes to dental diseases, Ottoman medical books mainly deal with pains. If toothaches could not be alleviated by drugs of various compositions, cauterization was applied. Attention was paid to dental hygiene, tartar and plaque cleaned, and whiteners were used. Decayed teeth were removed after comminuting them with acrid drugs or extracted with pliers. Excessive growth of the gums would be resected by scissors, tooth roots remaining in the jaw would be extracted. Various diseases of the gums, such as bleeding, recession, loosening, or itching (periodontology) were treated with a variety of drugs.

Instruments used for these operations were illustrated in these books.

Regarding the ear, Ottoman medical texts deal with issues such as pains, noise perception, itching, maggots,uncleanliness, removal of foreign bodies, or hearing loss. For the nose, cancer, loss of smell (anosmia), bad smells (ozena), polyps and warts and nosebleeds are being treated.

Considering the oral cavity and the throat, diseases and therapies such as operation of lingual frenulum and ranula and infl ammations of the uvula and the tonsils (tonsillitis) are being explained. Much room is given to issues such as leeching the throat or removing bones and other foreign bodies. For suturing wounds in the ear, nose or lip, a needle with silk thread is being used.

In the 15th century, any visible mass on the outside of the body was the domain of surgery. These growths were known as swellings or tumors. These masses were classified according to their clinical characteristics. Those that came along with warmth, change in color (reddening), and pain were called abscesses. They were not treated immediately; doctors waited until the abscess matured and then opened and drained it.

Solid or cystic masses that did not present with elevated temperature, redness and pain were usually called

sil’a. These kinds of growths were removed surgically.

Tumors under the armpits were cut in the shape of a crescent and after being tamponaded with old cotton for a day covered with ointment.

MUSIC THERAPY IN THE DAR AL-SHIFA’

When Evliya Chelebi visited the Dar al-Shifa’ in the 17th century, he reported that singers and instrument

players came to the hospital three times per week to perform for the patients and the insane, particularly playing modes known as neva, rast, dügâh, segâh, çârgâh, and sûzinâk in the science of music, to give them enjoyment and calm them.

In the 17th century, the rooms of the hospital were fi lled with rich and poor, old and young people afflicted with various diseases; in some rooms, the mentally ill would

roar like lions or scream at the top of their voices. As it was thought that nice smells were giving relief to the spirit, the buhuri (fumigator) employed by the hospital was burning incense every morning and evening and odorized the building to calm the minds of the patients. In spring fragrant flowers like jasmine, rose, gilly fl ower, carnation, redbud, or hyacinth were collected in the hospital garden and given to the patients.

Some patients would smell these flowers, some would eatthem and some tread on them.

In the 15th century, gynecological diseases were treated by female doctors and midwives. In the Ottoman period, treating piles, warts and red spots in the genital region, boils and abscesses, girls born with a closed vagina and removing fetuses that had died in the mother’s womb were the domains of female doctors (tabibe). If a female patient needed a stone operation (lithotomy) and a female doctor was not at hand, male doctors could also intervene.

Childbirth was attended by midwives trained in a masterapprentice system, who would be called into the home.

(consent bills), most of them from the years 1622-24.She had learned surgery from her husband Deniz bin

Gazi, whom she lost in 1620, and we understand that she subsequently practiced surgery on her own. All her patients were men, coming from various places in the Ottoman Empire.

Two of them were janissaries, called Mehmed Beshe and Ali Beshe. The fact that in the 17th century, a female surgeon would operate hernias in male patients is an important indication for the degree of freedom of profession for qualifi ed Ottoman women.